Why car companies need to do usability testing

- December 19, 2011
Overall I love my Toyota Prius. Under the hood, it is an engineering marvel. Prius' have been around for 10 years and still sell like hotcakes.  I honestly don't understand why Ford hasn't made a competing product by now.

I have come to realize that I pay attention to design more than the average person. I hate it when simple design mistakes ruin an overall well designed product. The interior of my Prius has some obvious problems that could have easily been fixed had they asked the right questions.


Separation of Concerns
Is there any reason they needed to put the door lock/unlock button between the buttons that operate the windows? 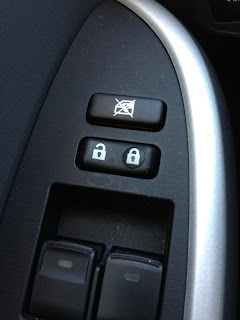 The buttons feel different - therefore its not likely that I'm going to press the wrong button. However, nearly every time I want to use one one of the buttons I have to take my eyes off the road and look at the buttons to choose the correct one or I have to feel each one to get the correct one. This simply violates the principal that you shouldn't make your users think necessarily.
Positive Actions vs Negative Actions
-and-
Direct Users To The Most Common Action
To me, Toyota completely confuses button shape and action. Its been nearly 8 months and I still have to stop and think about which is the correct button. I occasionally make the wrong choice and send a caller to voicemail rather than picking up the phone. Take a look at the phone answer and hangup buttons: 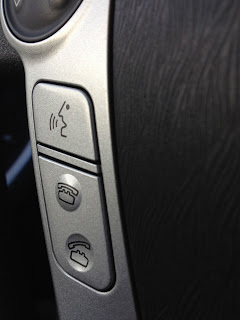 The button to hang up the phone (the top one) is raised. I consider this the negative action. The button to answer the phone (bottom) is sunken in. This bothers me for two reasons:
#1 If I'm driving and the phone rings I'm being interrupted.  Thus, I'm not 100% focused on the phone yet. The easiest button to find is the raised button. This should be the button I hit to answer, but Toyota made this the hangup button. Maddening.
#2 When I'm ending a call the sunken button makes sense. No matter what mnemonic I go through the raised button doesn't work for ending a call/conversation.
Because I'm thinking about what the right button should be I sometimes make the wrong choice because I'm thinking too hard about doing the opposite of what comes naturally.
*Note: They make all Toyota Prius' for the whole world in Japan. The above concerns might be personal issue or an issue of how British/Americans view the world. I don't know if Toyota makes all of their cars the exact same for all geographies either.
Design Product Design Product Development